I help run a card club in my local village - Saughall, Chester - and we have some really nice members. The club was started a few years ago by Jacqui and Alison and I started going there in 2007. Alison unfortunately had to give it up as she is now studying, so I stepped in to help Jacqui. We usually get between 18 and 26 members and there is a range of exerience and abilities amongst the members buit they are all very enthusiastic and I feel privileged to know them all. Each month we have a challenge and we all have the same item or items to work with. It never ceases to amaze me how many different ideas we can come up with using the same stuff. Starting next month, I am going to publish on here what we have all had and the results. I hope you enjoy seeing the results,
Posted by Dawny P at 16:39 No comments: 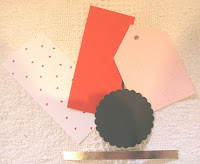 oooops - and a tiny punched heart which I forgot to include when I took the photo!!!

And here are the results. I think they are pretty impressive. Apologies to any of our ladies whose cards haven't appeared this time. It wasn't my intention to publish them this month, so quite a few of the ladies took their cards home with them. But they are really nice so I just couldn't resist. Next month I will publish a list of ther names as well.

Not reported much in this bit up until now because to be honest, there has not been anything to report :-( I have been stuck at 9st 12 now for 2 weeks and it has been driving me up the wall!!! But I had a 'Eureka' moment this morning. I am now 9st 11lb - woooo hoooooo!!! So that should keep me going for another week. Richard has been keeping me company on the diet and he has lost nearly a stone. How unfair is that!!! I went to M & S with Nikkie last weekend and I think there was some sort of conspiracy going on. Everywhere I looked there were chocolate puds with ooozy choccy bits in the middle and lemon tart things and clotted cream rice pud etc etc. I don't usually have a sweet tooth - more of a savoury girlie - but by the time I left that shop, I would have killed for a single spoonful of the wretched things.

Have to confess that last night, Emma caught me with my hand in the biscuit tin - oh dear. There are no words to describe how it feels to be caught out by your 27 year old, and getting disapproving looks from the skinny mare (her slogan, nay mantra is 'little pickers wear bigger knickers' - she wears a bit of string she calls a thong). I was getting one out for Kyla and I couldn't help myself. This may go some way in explaining just why nothing has been happening on the weight loss front recently . But I am reformed again now. It was just a moment of madness never to be repeated, your honour!!!!

Decided in the new year that this was going to be THE year when I lost a bit of weight in an effort to get back to slim bod I was when I first met Richard. I had a pair of white jeans which used to look great on me. Now I cannot get them past my knees - how very shameful. I have kept them because I am deluded enough to think that one day I will get back into them. So I have enrolled with Slimmers World - starting weight 10st 5lb which might not seem that bad but I am only 5' 3" and therein lies my problem; I am simpy undertall for my weight!!! Anyway, the first week started well - 3.5lb off which is fab!!! However, rather like my good self, it has all gone a bit pear shaped since then. So I am just off to get weighed.

Well, it wasn't good - but it wasn't that bad - 1/2 pound off!!! You would think by now that someone somewhere would have invented a pill that let you eat what you want when you wanted and still lose weight!!
Posted by Dawny P at 08:54 1 comment: 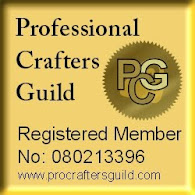 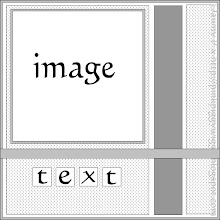